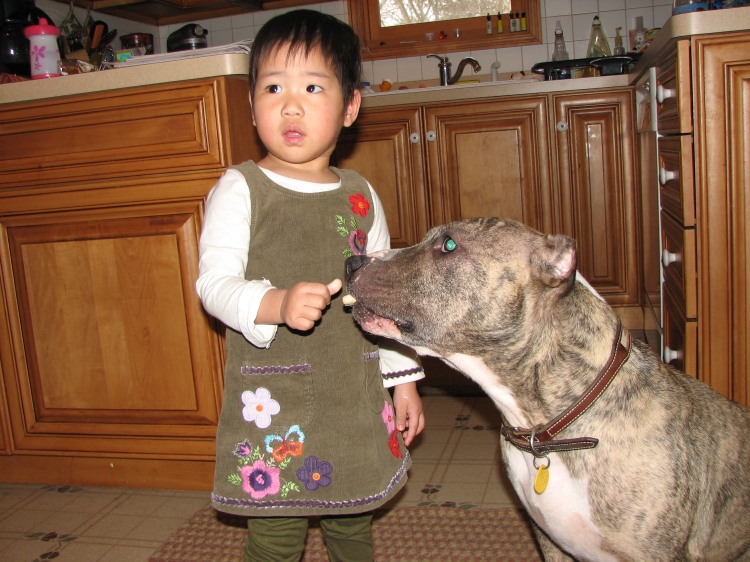 From the very start, Tiger was Grandpa to sadie

“You’re adopting a what!? Are you sure? I mean, at your
age . . . it’s . . . well, what about the dogs? You’re going to have to get
rid of some!” Our friend never did hold back her opinions.
The October 2007 announcement of our soon-to-arrive daughter
from China proved to be no barrier to her giving us both barrels.
Lynn and I had actually started the paperwork a couple of
years before. We started to tell those closest to us that we planned
to adopt, but before we could finish they’d interrupt with, “What
kind? Do you truly need another dog?” After hearing the rest of
our story, the reaction was somewhat more subdued: “Really? Gee.
Really?” In the interim some friends either forgot about our plans,
thinking them far into the future, or more likely thought we would
abandon our intentions altogether, seeing the light at our age.

The announcement that Lynn would be leaving for China within
a few months to pick up two-year-old Sadie Marie sent shock waves
through our network of friends, though nothing so overt as little
miss sunshine’s warm, fuzzy concern about our age and the dogs.

There was a definite cooling from those we expected it least . . . just
small things they said, questions asked and a distinct lack of enthusiasm
for the blessed event unfolding. But no doubt about it, their concern
was the same as our razor-tongued friend. We in turn were
saddened.

In truth, Lynn had fears. “What if Sadie was terrified of the
dogs?” “What if the dogs didn’t like Sadie?” “A new member,
forced into the pack, I just don’t know.” From my perspective, the
main concern was if Sadie had allergies. Either way, getting rid of
the furry side of the family was out of the question.
Getting the pack to accept her was a non-issue for me, having
done it with my older daughter Tracy many years before. My
practice had been then, as it was now, the same. There would be no
screeching and kicking at the dog(s) to get away when first bringing
home the baby. This was vital. You’re sure to foster resentment if
you do! We would not shove the baby in their faces. This was just
as important. We would not discourage gentle curiosity, but make
them feel part of something special and wonderful, and this would
garner positive results. Giving them a job to help put the little one
to bed or feed baby was great. A slow, commonsense approach to
physically introducing the new child and the pack to each other was
best. All the time and effort we put into blending the family paid big
dividends and was worth every minute. But all of that was a couple
of months ahead of us.For the moment, we had to deal with others’ (including some
family members’) anxiety.

There were those who felt we were committing
something tantamount to child abuse by throwing an innocent
toddler into a pack of dogs with unpredictable results. “Gee!
Sure appreciate the kind words. We’re so glad you have faith that we
might kinda know what we are doing!” Admittedly, that negative
remark came from outside our circle of friends. They also were not
dog people. They really didn’t know us, know our furry kids, and
certainly didn’t know Sadie. None of us knew Sadie yet. If we had,
any worries would have turned to dust….
(The rest of this chapter can be found in “Ruby’s Tale”) 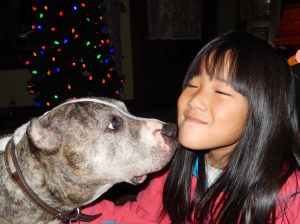 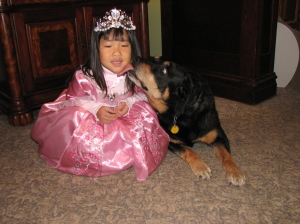 Carla the Rottie immediately took the roll of Nanny…Checking on little Sadie several times a night or whenever she fussed. She was Sadie’s shadow. Heartbreakingly, Carla is in the last stages of her life…

When we adopted Sadie, we took the optional “Child Protection Package”

Sadie…. just part of our pack, or “Tribe” as we are known.

Canine Behavior & Training, Board and Train, Daycare, and Seminars