By request, Blue stopped by Lynn’s place of employment the other day. (He allowed Sadie and I to join him) Being a consummate ladies man, the handsome lowrider charmed Lynn’s fellow workers out of some treats and a lot of petting!
….And to think, that if he hadn’t been whisked out of the city where he lived, The dear boy would have faced death. Not because he had done anything wrong. Nope. Just because of the way he looked….supposedly like a pit bull. The family he lived with, surrendered him, so that he might live. The local Humane Society took in ol’ Blue and spirited him out of town to the safety of our home. If you’re saying Whew! What a lucky dog!…I would suggest WE are the lucky ones. What a blessing he has been to our family and to those he has met.
So there you have it. Blue at Lynn’s work…..What’s in your office?

Blue checks in at the front desk for his ID….and a snack! 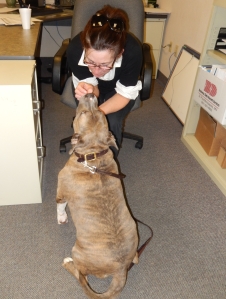 The lovable lug doesn’t get far, before takes a break for pets…and a snack

Whenever Ol’ Blue enters an office, productivity goes down temporarily. But morale shoots up! Here, he receives some good petting and a snack…. 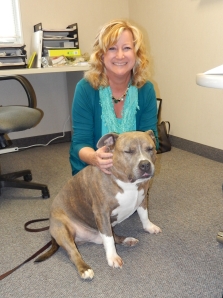 Time for a power nap while receiving a nice message from the boss. 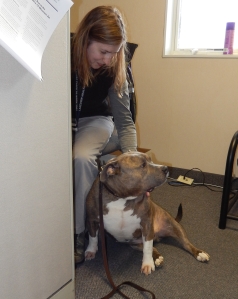 Back home, Blue raids the cupboards for his favorite but rare treat…… Marshmallos!

Relaxing with Sadie after a hard day’s work.

3 thoughts on “A day at the office with Blue!”