At first there was a lot of fuss in getting the routine down. A
few short weekend jaunts were in order. We were all adjusting, but
things did fall into place. Our kids had their favorite spots to ride.
Occasionally, they quietly swapped positions. Once in a while, several
of them, for example Carla, Ruby, and Molly, would claim the
same spot at the same time. No problem. They would simply pile on
top of each other like rugby players.
Each knew where their personal feeding station was located.
Thank goodness we didn’t have to deal with food aggression!
At night, same thing, everybody had a spot — Ruby in bed,
Venus and Carla on the couch, and Tiger and Molly in dog beds
on the floor. Potty breaks followed a pecking order. If we decided
to mix it up a little, they looked at us as if we had three heads. The
routine really did become natural. Like breathing, we didn’t even
have to think about it.
None of this is to say it was a well-oiled machine every minute
of every mile. There were issues such as the errant buffalo plodding
through our Yellowstone campsite one frosty June morning
snorting, puffing, and stomping his front hooves. He was a magnificent
beast.
Inside the camper, things were quiet, every eye trained on this
interloper. One last snort from the buffalo, and Tiger had enough. An
angry bark set off holy hell with everybody barking, even Ruby with
that little gruff voice! They jumped from window to window, snapping
at each other as the buffalo, duly unimpressed, sauntered on.
Why is it that when facing a common enemy, pack members
sometimes turn on each other? “I’ll take care of this.” Another
would pipe in, “No, it’s my job!” “No, I’m bigger.” Still another,
“It’s your fault for letting that thing get too close.” It just makes no
sense! Either way, we were shaken. Everyone in the campground
must have heard the ruckus, all that dog training shot to pieces.

We always sleep well while on the road and have never broken into….

Then there were times when their behavior left us completely
stumped. One evening in Idaho as dusk was settling in, we pulled
into a rest stop so Lynn could use a land-line phone to check in back
home. As usual, Tiger took Lynn’s seat at about the same time she
hopped out. Because Lynn was the alpha female, her seat was valuable
real estate! Casually slumped in his newly acquired position,
Tiger, relaxed, kept watch over Lynn. But in a heartbeat, he was on
full alert puffing himself up, making a strange guttural crying sound
as he zeroed in on a character I wouldn’t have picked up even in the
good old days of hitchhiking.
He was between thirty and forty years old, with hair that
reminded me of the ’60s wrestler “Wild Man of Borneo.” Filthy
clothes, unshaven, and just plain unsavory, he approached the
phone next to Lynn checking for forgotten change. My hand tightened
on the door handle, ready to spring. Finding no change, he
looked around, and didn’t even give our motor home a hard glance.
He positioned himself closer to Lynn.
That’s it! I’m out of here! A loud blast, a sharp pain in my right
ear, stopped me short. The side glass shook, and I felt the door handle
vibrate. It was Tiger letting out a bellowing rant that stiffened
the hairs on the back of my neck. This soft-eyed, peace-loving rescue
dog with no ears and an unsteady gate was putting it on the line.
I had no doubt Tiger would lay down his life for us. The shadowy
man took notice of the camper this time with eyes as big as saucers.
He wheeled away from Lynn beelining it through the trees toward
the other side of the rest stop.
Squeezing my 250-pound frame through the smallest possible
door opening so Tiger wouldn’t follow, I trotted over to Lynn. With
her head down, engrossed in conversation, she hadn’t noticed or
paid any attention to the stranger until Tiger’s violent outburst.
Tiger was still swearing, telling the unseen culprit exactly what
he’d do to him if he hurt us. Then it hit me — nobody else was barking.
They were watching intently, but not a sound. Again, it didn’t
make sense. I’m not complaining, mind you. Was it some unseen
communication to the other dogs? A tone? Whatever it was, it
worked! There they were, sitting tall and erect behind “Mr. T” like
Catholic schoolgirls ready to sing a song for the cardinal.
Entering the motor home, Lynn was greeted with much tumult,
tail wagging, kisses, sniffing, and close body contact. Ascertaining
that she was okay, it was every dog for themselves to find a comfortable
place to sprawl out for a well-deserved nap. Up until now,
Ruby was looking down on all the activity from her perch on a club
chair. She hopped down, gave Lynn a quick once over, looked up
with an approving few tail wags, zipped back to her throne, and
flopped down fast asleep. Ruby hadn’t ascended to alpha yet, but
she was acting more like it.
We didn’t know what the stranger’s motives were that evening
or what would have happened if Lynn had been traveling alone. It
was a valuable firsthand lesson to stay vigilant when engrossed in
some activity like making a phone call, working an ATM, or having
car trouble. Tiger would not always be there to save the day.

Hey! Hey! Look at those two guys breaking into cars. Let’s hide and if they break in here, we’ll really surprise them! 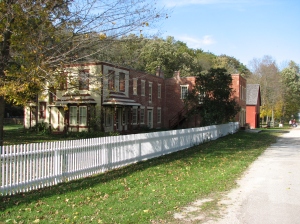 A tiny village abandoned in the 1800s when the railroad changed plans and didn’t stop there. 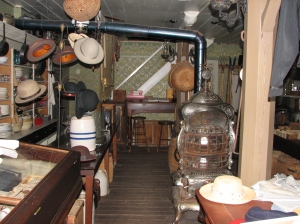 Merchandise was just left on the shelves. The owner and residents simply walked away…..Hidden for many years, The state of Minnesota turned it into a state park.

Southern Minnesota …A cool little town lost in time…Jesse James may have passed through here on the way to Northfield. 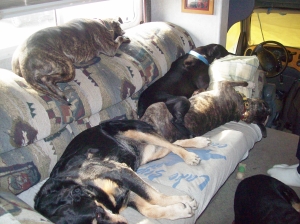 The end of a long day on the road….The Tribe is dog tired.